In 1996, when JOY Youth Training Centre brought some pure dairy goats from the HPI project in Kasese, World Vision bought some of the males in order to establish buck stations in various parts of Masaka District. One of these was placed with Fred Kabuye of Kasasa West in Bukulula Sub-County. This was the most successful buck station that they established. Since then, with support from JOY Youth Training Centre, the sub-county has become a major supplier of 50% and 75% dairy goats. In 1998, because of the enthusiasm for goat breeding shown by the farmers, Masaka District Local Government started to place some pure Boer males within the sub-county, and so they became suppliers of 50% and 75% Boer crosses as well.

From 2010 onwards it became clear that relying on external groups to bring breeding stock was not sustainable. The number of pure dairy and Boer goats had dropped alarmingly, to the point where the cross-breeding programme was collapsing. So some leading farmers approached JOY Goat Development Programme for assistance. Because of the enthusiasm of the farmers and also the evident skill that had been built up in goat rearing, we readily agreed. But the agreement was made conditional on the farmers establishing a formal organisation and also that they agree on a sustainable long-term breeding plan. The group considered various strategies, and settled on breeding 75% dairy crosses and 75% Boer crosses. In order to make the programme sustainable, enough 75% females would be retained for mating with 75% males. In this way breeding could be continued even without external support.

So JOY Goat Development Programme has supplied some pure dairy males to restart the dairy goat part of the plan. The organisation is still looking for assistance with purchasing some pure Boer bucks in order to restart the Boer goat breeding. 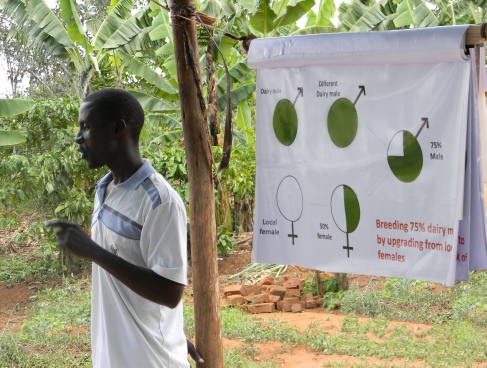 As well as supplying breeding males, we have been training the farmers’ groups at parish level. They already have a lot of experience of goat management, so the training has been primarily on establishing clear breeding goals and keeping good records.

Most of the parishes within Bukulula sub-county now have active breeders groups.  In addition, some of the groups that had been established by JOY Goat Development Programme in neighbouring sub-counties have also joined with the Bukulula farmers. This is particularly true of Kyamulibwa Sub-County.