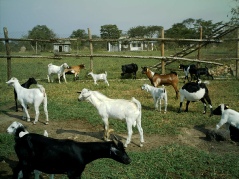 If goats are kept in large herds, with males running with the females at all times, then the recommended ratio is one male to 30 or 40 females. In this situation, each male is working quite hard. In addition to foraging for sufficient good fodder, the male has to be checking for which females are on heat and fighting off rivals. So if too few males are kept, then either they will lose condition, or some females with fail to be fertilised

Number and spacing of buck stations

When the males are housed, they are not working any where near as hard. Good quality fodder is available at all times. (Or should be!) Someone is checking which females are on heat, and bringing them. So a buck can comfortably serve 3 females a day. Even in a village with a relatively large number of goats, it is unlikely that there will be more than 100 breeding females brought to the male in the course of a year, and each female will not be brought more than three times. (Allowing  for ‘repeat’ visits, if it fails to conceive first time.) This is still less than an average of one mating per day, which is well within its capability.

The keepers are part of the picture

The further apart the bucks are, the larger the area covered, and the more farmers who will benefit. From the above analysis it would be tempting to suppose that one male could serve a very large area, especially if the number of active goat keepers was low. The buck would manage it, but the goat keepers would not. When a doe comes on heat it needs to be mated quickly, otherwise the mating will be unsuccessful. The further away the buck is, the less likely that the doe’s keeper will drop whatever else needs doing and trek to the buck station.

In mountainous areas the optimum distance between bucks is 1½ to 2 km. In flatter areas it is 3 to 4 km. 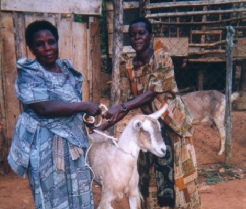 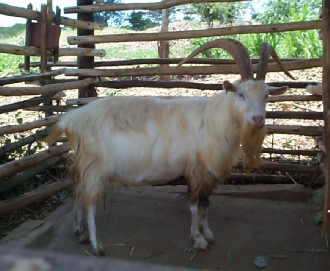