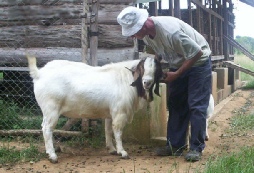 Boer goats are probably the best meat goat in the world, as measured by growth rate and conformation. In Uganda they have been brought in by government programmes, NGOs such as Heifer International and Send-a-Cow, and also by individuals. Pure Boer goats are markedly less hardy than local goats, especially in the wettest parts of Uganda. However, the cross-breeds do well, and exhibit noticeable heterosis (hybrid vigour), often approaching the size of pure Boer goats under Ugandan conditions.

Savannah goats also originate from South Africa. Like Boer goats they have large pendulous (floppy) ears and a convex face (‘Roman nose’). Only a few have been introduced into Uganda. The main reason for interest in them is the suggestion that in regard to export to the middle east, white goats would be more popular than pigmented goats. Like Galla goats the skin is dark despite the white hair, making them resistant to sunlight unlike Saanen goats.

In its native South Africa, the Kalahari red is favoured in situations where goats are susceptible to predators, because it’s colour makes it better camouflaged against the soil. The simplest description of it is a ‘red Boer goat’, but it has a distinct genetic heritage. In Uganda, goats with this appearance, such as the female shown on the left, are likely to be exhibiting the recessive fully-pigmented trait that appears occasionally in the offspring of Boer goats, rather than being true Kalahari reds. 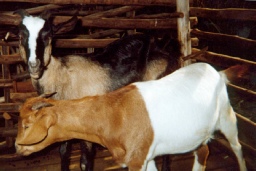 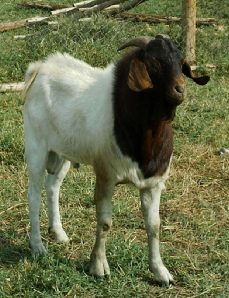 Some unscrupulous dealers have passed off 75%, or even 50%, Boer goats as pure. So it is very important to understand how to spot the difference. The simplest way is to look at the ears. The doe above shows the typical ears of a 50% - much larger than those of local or dairy goats, but sticking straight out instead of hanging down. The 75% male shown right has larger ears, but still not as markedly pendulous as a pure Boer. Also, the convex face, which is very noticeable in pure Boer bucks is not as pronounced.