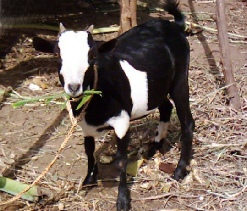 Small East African (SEA) is the name given to a type of goat which is found throughout Eastern Africa from Zimbabwe and Malawi in the South through Tanzania to a large part of Kenya and Uganda.

These goats are predominantly kept for meat. They grow slowly, but have a heavy-set conformation.

Among the valuable characteristics of these goats is a tolerance to heartwater (an endemic tick-borne disease) and worms and possibly other diseases such as mange.

The hides give a good quality leather. 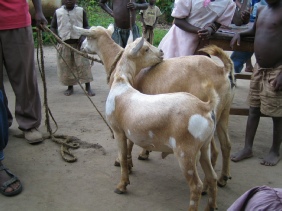 In Uganda milking of goats is very rare. We have milked some in order to measure how much is produced. The amount varies, but is generally ¾ litre or less, and starts to reduce only a few days into the lactation, being practically zero after 4 or 5 months.

The Bagisu of Mount Elgon in SE Uganda and the Bakonzo of the Rwenzozri Mountains in the SW do milk their local goats where there are no cows. Preliminary data suggest that the milk production of these sub-types may be slightly above that of a typical SEA, but the lactation is similarly short.

In the Acholi (Northern) and Karamoja (Northeastern) regions, the goats are much smaller than SEA and are closely related to the Sudanese Dwarf Goats of Southern Sudan. Although the Karimajong milk them when cattle are not available, it is only the large numbers kept that make this feasible - only 100ml, or occasionally 200ml is obtained per goat.

The Mubende goat is a sub-type of the SEA. It is poorly characterised and there is no distinct breeding population or geographic area where it can be found. However, there is certainly considerable variation among SEA and this has enabled people to select some faster-growing, larger goats from the general population. This may eventually lead to the development of a well-defined Mubende breed.

The Galla goat is not indigenous to Uganda, but originally comes from Kenya’s Northeast coast. However, it has played an important part in the development of the Kenya Dual Purpose Goat. It has also been found to be better foundation stock than SEA for breeding 75% Toggenburgs in the Mwingi project of FARM-Africa Kenya. It may therefore have some future for the development of Ugandan crossbreeds.