Masaka is home to JOY Youth Training Centre, from which the JOY Goat Development Programme grew. The current goat breeding project has grown out of a collaboration with Vi Agroforestry (now Vi-SCC). Within a 50 km radius of Masaka Town, we have selected the 12 areas where take-up of the dairy goats has been most enthusiastic, and in each area we have set up a cluster of between 3 and 10 active villages. This includes Bukulula and Kyamulibwa where they are breeding the 75% bucks that we supply to other regions. Unlike our other projects, the Masaka breeders groups are coordinated directly by the Goat Development Programme, without the mediation of a partner organisation.

• Builds on the existing Vi-JOY project

• Other organisations such as World Vision, Send-a-Cow, Heifer International and Caritas have also introduced dairy goats, and thereby helped to popularise them.

• The intervention of Vi in this hilly district means that there is already an understanding of integrating fodder supply with environmental protection.

• A large number of Boer goats have been introduced into the district, which in many cases has distracted farmers and led to confused breeding goals,

• Because Masaka has become known throughout Uganda as a source of breeding stock, this has diverted farmers from seeing goats as production animals, and thereby inhibited the selection process

• The introduction of dairy and Boer goats has been done with scant record keeping, so in many places the blood levels of the current goats are uncertain.

• Vi transferred the focus of their operations from Masaka to other districts before the Goat Development Programme was launched, so some fledging breeders groups floundered in the meantime.

• Proximity to the ‘cattle corridor’ has led to some cultural aversion to goats milk. 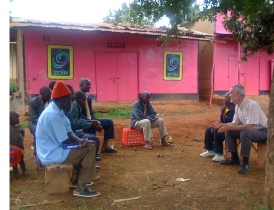 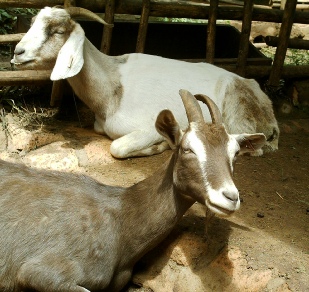