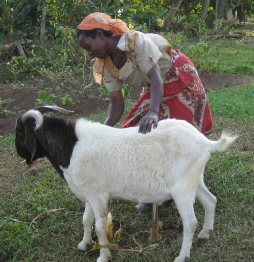 Indigenous Ugandan goats are predominantly used for meat, but their performance falls well short of that of the Boer goats that have recently been introduced. But these goats originate in a dry, semi-desert area of South Africa and do not do well in the wetter parts of Uganda. However, as with the introduced dairy breeds, they produce very good offspring when crossed with local goats.

Another problem that can arise when Boer and dairy are introduced simultaneously is that farmers may not have a clear breeding plan. Quite commonly they will mate the offspring of one with the other, often with disappointing results. While there is some benefit in mating a dairy doe to a meat buck, it is important to teach farmers that the resulting offspring should be destined for slaughter, not kept for breeding, and that despite their impressive appearance the milk yield will be poor.

Unfortunately, some NGOs (not the specialist livestock ones) contribute to this confusion by bringing improved goats into a community without clearly communicating what they are for. As a general rule, whenever improved breeds are introduced, the community need to be clearly told what the grade (percentage blood level) of the new goats is. They should also be advised on an appropriate breeding plan, and provision should be made for rotating the males. 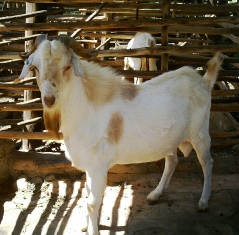 If the introduction is well planned, and the community are taught properly, dairy goats and Boer goats can go together very well. If a dairy goat is mated to a Boer male, the resulting kid grows very quickly and is not a thin as a pure dairy goat tends to be. If the mother is a dairy x local cross, then the results are often even better; the local blood improves both disease resistance and conformation. In this way, productivity can be maximised.  Milk production from the does is not compromised, but the kids have a high sale value.

Of course, the farmer also needs to ensure that he has some dairy kids as potential replacements as the mother does get older. For this reason the most productive doe should be mated with a dairy male to produce breeding stock for both the household and for sale. This forms one component of the selection process for improving the dairy breed.

To summarise, we encourage the introduction of Boer goats alongside the dairy goats, but only once the value of the milk has been appreciated by the community.