There are very many different breeds of dairy goats in the world. This page will concentrate on the breeds that are most commonly found in Uganda, but it should not be taken as an exhaustive list.

There are many breeds of goat derived from the white goats of the Saanen valley in Switzerland. Heifer International brought British Saanen from UK and Eire. More recently, they and Send-a-Cow have brought similar goats from South Africa.

This goat has a very good reputation for high milk production. But, unlike tropical white goats, it has pink skin which is sensitive to damage from tropical sun, so shelter is essential.

After the Saanen, the Toggenburg is the commonest dairy goat found in Uganda. One of the main promoters of this type is  FARM-Africa, whose breeding programme is based on the use of British Toggenburg goats.

The Toggenburg has good milk characteristics, and its pigmented skin is resistant to bright sunlight. However, the original Swiss breed is very hairy, making them prone to overheating in hot climates. This is less common in the British Toggenburgs but is still sometimes a problem.

The Anglo-Nubian goat has been bred from crosses of English, Indian (Jamnapari), Egyptian (Zairaibi) and other goats. To those unfamiliar with lop-eared goats, the convex (‘Roman-nosed’) face and large pendulous ears can cause it to be confused with the Boer goat. However the colouring is very different.

Because it has some tropical ancestry it is often expected to adapt to Ugandan conditions better than other dairy breeds, but this has not been borne out in practice. A useful characteristic is that the milk is very concentrated.

One of the difficulties faced by buyers of dairy goats in Uganda is that there are now many high-grade crosses. From 75% and above, these can closely resemble pure dairy goats. So it is important when buying goats to get them from a reputable supplier who can verify the ancestry. 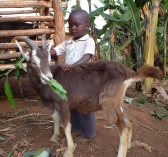 A few British Alpine goats have been brought into Uganda. The goats have a glossy black coat with white ‘swiss’ markings. (Similar to the markings on Toggenburg goats.) This colouring can also be found on some mixed-breed dairy goats such as the second-generation Saanen-Toggenburg cross shown in the picture. The British Alpine should not be confused with the French Alpine goats or the German Alpines that have been introduced into Kenya, which have very different ancestry.