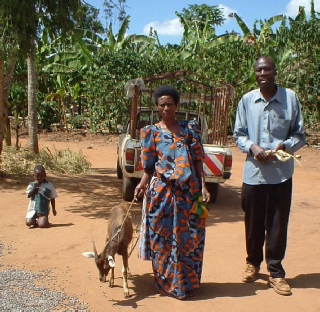 This programme is based on the assumption that it is sufficient to give a male goat in order to bring milk to a whole community. However, goat keeping is never 100%; there are always some households which have no goats - sometimes only 10% or 20% of the households, but sometimes 70% or 80%. It is reasonable to ask “how can a poor family with no goat ever get started on the breeding programme”.

Actually, there are several mechanisms

It is not necessary to start with a full-grown female. A kid can be bought quite cheaply. However, if someone buys a young female, then it may not be ready for mating by the time the stud male is moved to a new area. That is one of the reasons why we place a series of three improver bucks over a period of 4½ years so that there is enough time for slow starters to catch up.

In many areas there is a well established cultural principal that someone who has no goat can borrow one from a relative, and then the kids born are shared between the borrower and the lender. Sometimes the lender is not a relative but a neighbour that sees a commercial opportunity in breeding crossbred goats but does not have the resources to rear as many as they would like. So they lend out one of their breeding females as a way of maintaining or expanding their herd, without entailing more mouths to feed.

Donations from other organisations

Despite the above mechanisms, there are sometimes situations where there really aren’t enough local goats. This may be due to a period of drought or war. In such cases, a larger NGO may distribute indigenous goats or low-grade crosses as a relief measure. In such cases the role of such a donor is complementary to ours. They may not have the expertise to carry out all the training and planning that an effective breeding programme requires, but th 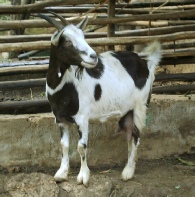 ey do have the funds to ensure that an adequate number of goats are available. We do not have the resources to give out large numbers of goats, but we do have the experience to place good quality bucks which will maximise the impact of the donated does.

Often, the reason that households do not have goats is not that they have no way to get them, but rather that the goats do not give sufficient return to make it worth doing so. If it is possible to improve the returns from the goat through breeding better animals, then more people find ways of taking up goat keeping.

How can someone without a goat get started?