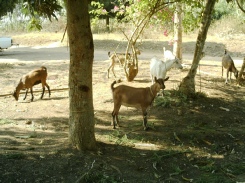 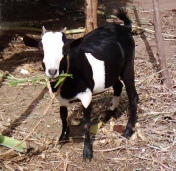 Indigenous goats are used primarily as meat animals. Where land is plentiful, large herds are often kept, either on a ranch or open grazed on communal land. Where arable farming predominates, the numbers of goats kept are lower, typically from 1 to 3 goats per household, and only 20 to 80% of households having any goats at all. In this context the goats act as a savings bank - they provide a ready source of lump-sum income when needed.

In areas such as Mbarara where there are many cattle, the price of milk is low. In such areas, milk production and beef production give similar returns. Because milk is plentiful, most of the milk produced is sold to traders who take it to other areas, there is little opportunity for a farmer to sell it retail to neighbours.

The influence of Transport on economics

The price of meat varies by no more than 20% across the whole of Uganda. This is because live animals can easily be transported from the areas where they are produced to areas where there are few. The retail price of fresh milk however, varies by at least a factor of 3.  This is because the effective cost of transport is high due to the short shelf life of the product, and the risk of spoilage en route or the cost of refrigeration.

In areas where arable (crop) farming predominates or where cattle numbers have been reduced by civil disturbance the price of milk is high - 2 or 3 times that in cattle-keeping areas, but the price of meat is only 10% or 20% above the price in cattle-keeping areas.  This means that in such areas it is always more profitable to produce milk rather than meat. This effect is accentuated by the fact that the shortage of milk means that a producer can sell directly to neighbours at retail prices, and does not depend on a trader buying at wholesale price. In the case of cows milk, which is familiar to consumers, this is straightforward. In the case of goats milk, this profitability is potentially there, but can only be achieved if there is effective marketing by the producer, because the customers are not necessarily aware of its value.

Although the main focus in such areas should be on maximising milk production, it is possible to integrate milk and meat production to maximise profitability.

For certain uses, goats milk has an advantage over cows milk. In Kenya, where there is more familiarity with goats milk, this means that both fresh and processed milk can sell at a higher price than cows milk - typically around 30% higher. In Uganda, the market for goats milk is not as well developed, so goats milk is generally sold at the same price as cows milk. When production is high enough, so that collective marketing becomes feasible, then it is likely that the situation in Uganda will move towards that applying in Kenya.

of milk vs. meat