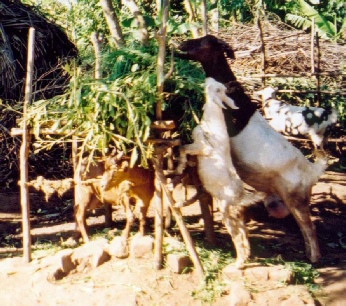 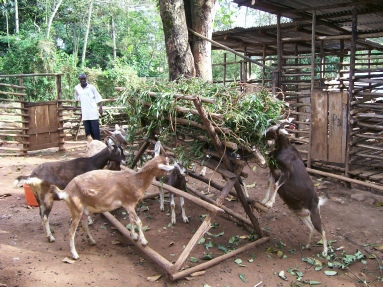 Goats are more susceptible to worms than other domestic livestock, which means that fodder hygiene is very important.  In addition, kids are prone to coccidiosis, which can also be contracted from dirty fodder.  Both of these issues seem to be more serious for exotic goats (both dairy and Boer goats) than for Small East African Goats.

For this reason it is strongly recommended that the fodder for the goats is placed on racks such as those shown in the pictures. The rack on the right is simple ‘camp table’, known locally as a katanda.  The one below is more purpose-designed, but both serve equally well to avoid faecal contamination of the fodder.

An important part of the design is the rail that the goats use for climbing on.  If the feeding rack is long, this rail should have gaps in it so that there are escape routes in case the goats fight.

Click on an image to see a larger-scale view.